Historically, people have thought that comets were messages foretelling major events or change.  This has carried over into fictional works, where comets signify something important.  Take, for example, the television show Game of Thrones and the book series it’s based on, A Song of Ice and Fire.  Both sets of works feature a red comet.

In A Game of Thrones, the first book in the series, the red comet is first seen by Maester Luwin in Winterfell, after Ned Stark’s death.  In Essos, Daenerys Targaryen used the comet as a sign to light Khal Drogo’s funeral pyre.  Her dragons hatch from their eggs within the fire.

Later books describe what the comet meant to other characters.  Arys Oakheat believes it honors the new king, Joffrey Baratheon;  Melisandre claims it is to mark Stannis Baratheon as the prince that was promised;  Old Nan declares the comet marks the presence of dragons; still others believe it is an omen of blood, murder, and war.  Much of these views are present in season two of the show as well, with just with different characters.

And like everything else in Game of Thrones, there are a million or more fan theories on what the comet means.

But let me ask you this- why is the comet red? 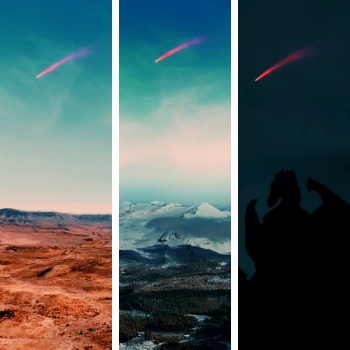 Comets are celestial objects made of ice and dust that follow elongated elliptical orbits around the Sun.  The body of a comet is composed of a frozen solid core surrounded by a large cloud of gas and dust known as the coma.

A comet usually has two tails- one ion tail and one dust tail.  Comet tails can stretch to over 100 million miles (160,000 kilometers) long, and change in length based on how close the comet is to the Sun.  As the comet approaches, more ice vaporizes, creating more material for the tails and allowing the tails to grow longer.  As the comet moves away from the Sun, less material vaporizes, so the tails shrink or disappear.

The ion tail is formed when solar radiation ionizes neutral gas, stripping away one or more electrons and creating charged particles called ions.  Because these ions are electrically charged particles, they’re affected by the sun’s solar wind, which is composed of charged particles escaping from the Sun.  The magnetic field of the solar wind pushes the ions into a tail that points away from the Sun, or in the same direction of the solar wind.  The ion tail often looks blue because it is composed primarily of carbon monoxide ion, CO+, which absorbs sunlight and emits it as blue light.

So we have one bluish ion tail and one white-yellowish dust tail.  What about red comets?

I couldn’t find an example of a real red comet.  (Though I did find out that there is a type of hummingbird known as the red-tailed comet.)  To have a red comet, the comet and tails would have to be made of dust that reflect red light or ions that emit red light.  Furthermore, these substances could not be overpowered by other substances giving different colored light.

You can see red shooting stars, or meteors.  Meteors are the result of space debris falling through Earth’s atmosphere.  The debris could come from comet trails, asteroids, or collisions between celestial objects.  We call the debris meteoroids.  When a meteoroid enters the Earth’s atmosphere, friction between the debris and atmospheric gases heats it, causing the meteoroid to glow.  Meteoroid particles collide with air molecules, causing electrons to jump up into a higher orbit.  When the electrons fall back, light is emitted.  This glow is the meteor.   The color of the meteor is dependent on the meteorite material and the atmospheric conditions.  For example, calcium ions (Ca+) emit violet light, sodium atoms (Na) give an orange-yellow light, and iron (Fe) emits yellow light.  Atmospheric nitrogen and atomic oxygen also emit light- in their case, red.  If emission from the atmospheric particles dominates, we end up with a red meteor.

However, individual meteors are quick events.  That’s why they’re called shooting stars- they rush across the sky quickly.  If you blink you could miss it.  The red comet in Game of Thrones was in the sky for an extended amount of time.  (It was also visible during the day, when it would be very difficult to spot a comet or meteor, but not impossible.)

So if you see a real red comet in the sky, call NASA, and then call me, because I think it marks the birth of a dragon.